Cycling along the Berlin wall 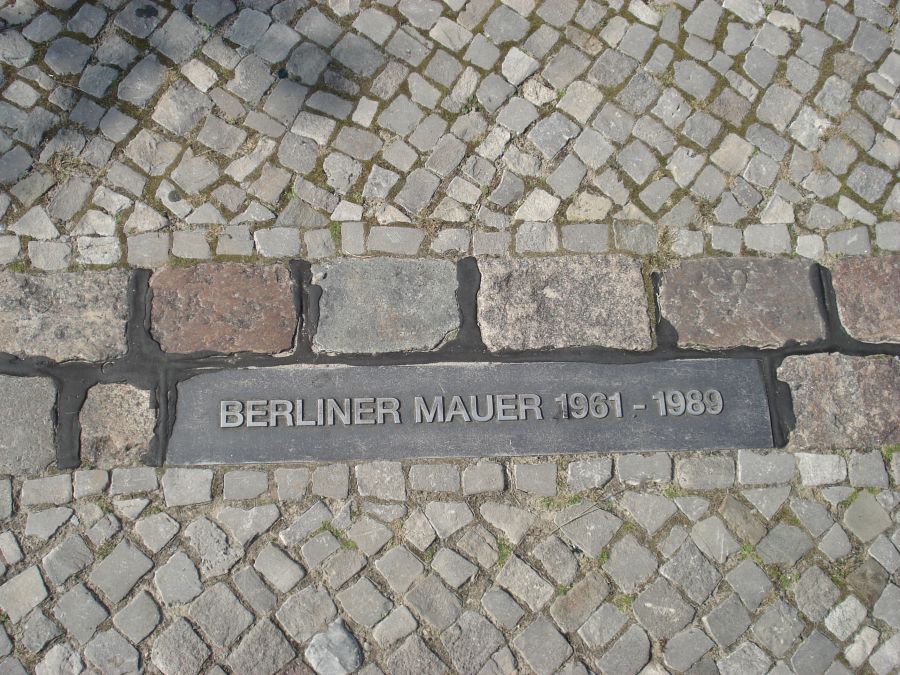 The start is at the S-Bahn station Ostbahnhof. Passing the Schillingbrücke, you will reach the Bethaniendamm, past the St. Thomas Church and the Künstlerhaus Bethanien. The latter accommodates changing exhibitions and with “3 Schwestern” a great café with a courtyard. The outdoor cinema Kreuzberg is also located in that courtyard – in a great atmosphere you can watch films mostly in the original. 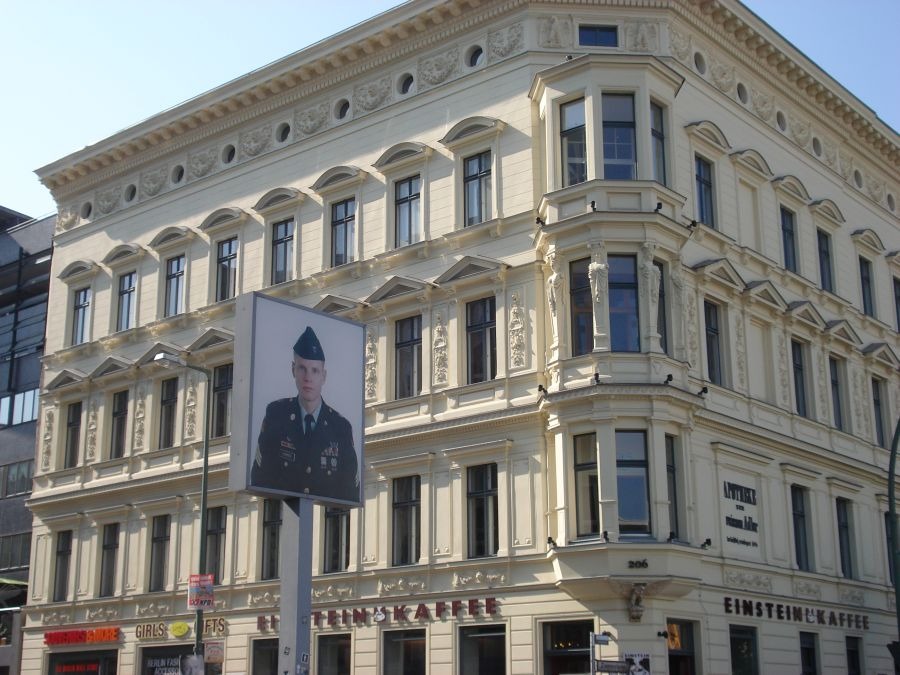 Continue to the Engelbecken, which was part of the former Luisenstadt canal. This has connected the Spree river with the Landwehrkanal from 1852 to the construction of the Berlin wall. Today, only the Engelbecken is filled with water, the rest has been rebuilt since the fall of the wall into green areas and parks. It is also great to ride a bike here.

The double cobblestone row (see picture above) offers a good orientation to continue towards Heinrich-Heine-Straße. Here on the corner of Sebastianstraße a blackboard reminds of the former “Übergang für Bundesbürger” (crossing for citizens of West Germany).

Continue along the cycle path signs “Berliner Mauerweg” via the Sebastian-, Stallschreiber- and Kommandantenstraße to Axel-Springer-Straße with the publishing house of the same name. In this section you can see the changes in Berlin very clearly. Old buildings are next to newly built, modern residential palaces – you probably would prefer to not know the rent here.

Turn right at the next corner into Zimmerstraße, direction “Grenzübergang Friedrichstrasse” (former border corssing) – better known as Checkpoint Charlie, probably the most famous border crossing of them all. Accordingly, many people are always to be found here. Souvenir shops, cafes, border houses, wall museum – everything that makes the tourist heart beat faster 😉 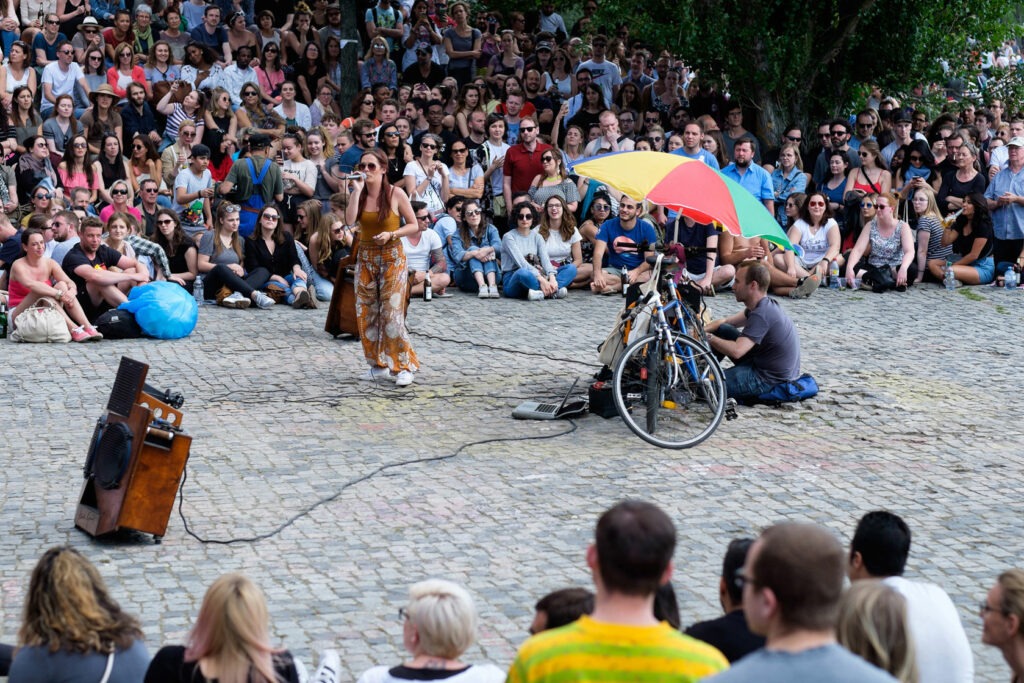 Going straight ahead, you pass the topography of terror, including the remains of the wall, and the Martin-Gropius-Bau. The latter is one of my favorite museums in Berlin with changing international exhibitions.

Via the Stresemannstraße you will reach the Postdamer Platz – the modern Berlin. As a Berliner you cannot get used to the picture of the skyscrapers somehow. I’m never here, but you should have seen it.

Continue straight ahead and on the right (corner Hannah-Ahrendt-Str.) your will find Memorial to the Murdered Jews of Europe by architect Peter Eisenman. You can think of it whatever you want. For my part, I have been “in it” several times already. You stand there in the center on a slightly sloping ground, the sunlight only partially shines through the high stelae, you can not see the exit properly and it seems somehow colder than “outside”. I think that is exactly the oppressive effect that was intended. Lock your bike and walk around, you’ll see what I mean…

A little way down the street is the Brandenburg Gate. Probably the most famous symbol of the reunification. The images of the people on the Berlin Wall with the Brandenburg Gate in the back on the night of 9 November went around the world. Even today, the gate with the Paroser Platz in front of it is really nice – even though there are always too many tourists 🙂

Therefore, go on to the Reichstag and further down to Kronprinzenbrücke along the Spree. From the bridge you have a magnificent view of the main train station, in summer you can see some nice sunsets here. Turn right at the next corner to the Alexanderufer, past the university buildings of the Charité. 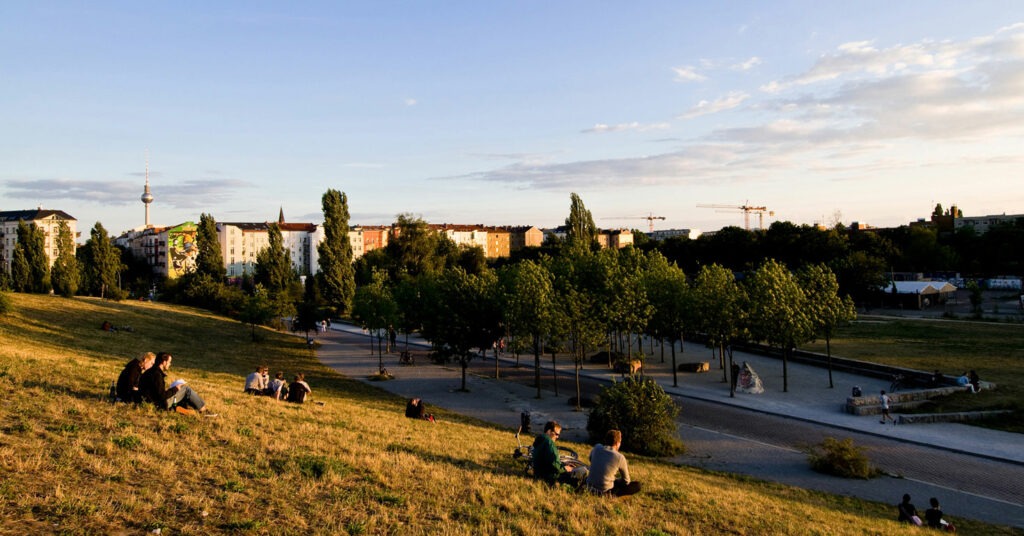 Across the road there is a small path along the Schiff­fahrts­kanal for pedestrians and cyclists, whose existence I did not know at all. A well-developed path that leads through the Invalidenfriedhof (cemetery). Please descend here! This was inaugurated in 1748 and once housed 3,000 graves. The GDR government wanted to demonstrate the distance to Prussia, cleared graves after 1945 and later divided the site through the wall. After the reunification, some graves were renewed, some panels tell about the history of the cemetery.

Continue straight, with a small dangling over the Boyenstraße it goes on to Liesenstraße. Here is the French cemetery. At the end, 20m from the border strip, lies the famours German novelist Theodor Fontane. His tomb was almost destroyed by the construction of the Berlin Wall.

Pass under the S-Bahn bridge, then right into Gartenstraße. On the left side, the St. Sebastian Church is a veritable feast for the eyes. My heart beat faster and I had to stop immediately…

Continue straight ahead and turn left at Bernauer Straße. Here is the open-air memorial of the Berlin Wall. It is worthwhile to get off the bicycle and walk the path to Brunnenstraße. There is a lot to see.

Continue along Bernauer Straße to Schwedter Straße. Here turn left into Mauerpark. The Sunday Karaoke at Mauerpark by Joe Hatchiban has become a Berlin institution. Although no secret tip, but still an experience when every Sunday more than 1,000 people come here. In addition, Berliners and tourists alike meet for the flea market, barbecues or play football here. A break to watch people is worthwhile 🙂

From there it is almost only straight ahead, over the Behmbrücke and later with a small dangling on the Grüntaler Straße to the S-Bahn Wollankstraße. From here you can get back by S-Bahn or just by bike…

Need a bike? Find a bike rental in Berlin.